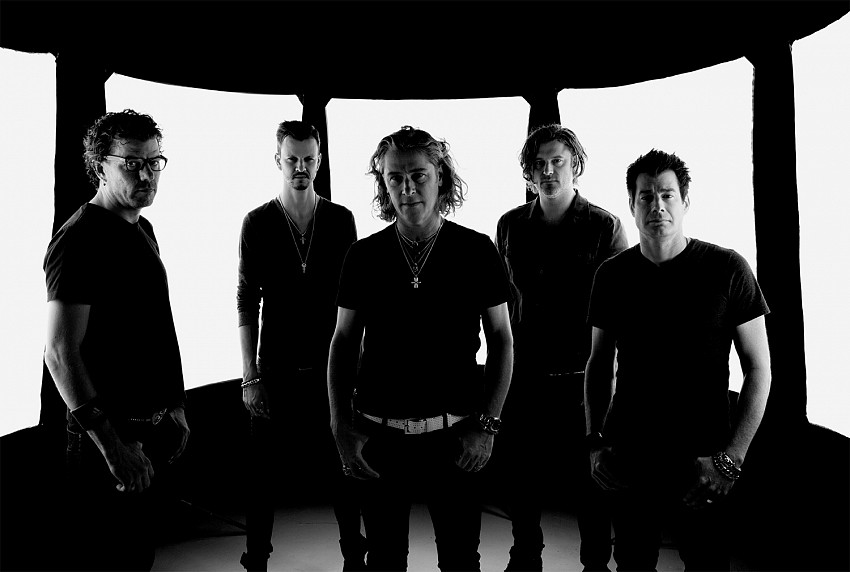 Collective Soul, the Multi-Platinum selling Georgia-bred rockers are not only on the cusp of celebrating their 25th anniversary, they’re also gearing up for an exciting Summer 2018 tour dubbed The Rock & Roll Express. This triple-threat triple bill will feature Collective Soul performing alongside two of their favorite spiritual rock & roll brethren, 3 Doors Down and Soul Asylum.

The Rock & Roll Express will feature the band’s full-throttle energy that was captured so deftly on their recently released Live album. From the elegiac verve of the career-defining “Shine” to the heartfelt universality of “The World I Know” and the earnest offering of “AYTA” (a.k.a. “Are You the Answer”), Collective Soul is clearly firing on all cylinders.

“When you see us this summer, you’ll get the vibe of how much we enjoy what we do. You’ll see how much we enjoy each other, and how much we enjoy making music together,” confirms Collective Soul’s visionary frontman and chief songwriter, vocalist/guitarist Ed Roland. “You’ll get all the hits, but we’re also going to throw in some new stuff too. One thing about having nine studio recordings is that it’s hard to fit everything into the set right now. It’s a good problem to have — to be around that long and have so many songs people really want to hear. But once we find the right live groove, we also know what works in this kind of set.”

Part of finding that fine live balance comes from the level of care Collective Soul take in crafting their set in order to maximize the best live experience possible for their audience. “It’s all about the dynamics,” Roland observes. “We talk about all kinds of different things — even the background vocals, and how we want them to appear. Sometimes they’re louder on the actual studio recordings, and sometimes I feel they need to be softer when they’re live.”

A good bit of Collective Soul’s onstage performing acumen can literally be found in their collective DNA, what with Ed and his brother, rhythm guitarist Dean Roland, having a Southern Baptist minister as their father. “As a child, I would look at my dad up on his stage. He had a pulpit, but it was his stage, you know?” Ed recalls. “That’s how we all grew up, to be honest with you. Dean and I saw my dad preach, and [CS bassist] Will Turpin and [CS lead guitarist] Jesse Triplett grew up in the church too, so we all kind of fit in that mold. And when you see us play, you should feel like we’re holding a kind of revival. I guess I always dug that idea. I just wanted it to be louder, and with more lights!” he concludes with a laugh.

The hallmarks of that special loud/soft band dynamic is something Roland, in his role as Collective Soul’s producer, knows how to capture in the studio. “You don’t want everything to just be linear,” he notes. “We’re very careful about that as a band — where we bring things in, and where we drop things out. To me, space is awesome. Space can be just as dynamic as a loud guitar going through a 4x12 cabinet.”

Which song does Roland think exemplifies Collective Soul’s greatest use of space? Without hesitation, he cites “December,” one of the most impactful and vibrant tracks from their self-titled 1995 release. “It has the breakdown where you have that one guitar, bending that single note,” Roland explains. “That was the beginning of me thinking about how we could find where to give our songs a breath before we go into something else. It’s something we pay close attention to as a band. Just because you have the guitar strapped on doesn’t mean you have to play it all the way through the song. There are other things you can come up with.”

The bottom line is, Collective Soul music is all about harnessing the honest feeling of rock & roll, no further labels necessary. “Brad Arnold [lead singer of 3 Doors Down] and I were talking about this a couple of weeks ago,” shares Roland, “and even when people were calling us grunge or post-grunge, we just considered ourselves a rock band. We never considered calling it alternative, grunge, or whatever — we’re just a rock & roll band. We’ve become very comfortable with how we describe our music.”

Approaching their 25th anniversary in 2019, it’s evident the legacy of Collective Soul is as strong as ever. “I think it all comes down to the songs,” Roland believes. “When we started out as a band, we just wanted to write the best songs we could. We always had the mindset of being an album-oriented band. We wanted to create the 10 or 12 best songs we could get on there. It wasn’t like, ‘Oh, that’s the hit. That’s the one that’ll be on the radio. Let’s hurry up and finish.’”

What does Roland feel is the best song in the Collective Soul canon? “Well, it’s actually the most necessary song I’ve ever written — and that would be ‘Shine.’ Had it not gotten the attention it did, no other song would have been written. But which one is the best one?” he muses. “It’s the one I wrote yesterday, because that’s the way I treat it. If I think I’ve already written the best song I could write, then I need to stop. I don’t think I’ve even come close. My brother Dean tells me all the time, ‘You just live for that next song!’ And I’m like, ‘Yeah.Yeah, I kinda do.’”